Briley is a 13 year old singer-songwriter from Downers Grove, Illinois.

She has been singing from the moment she could talk and over the years has grown into her own artist as a singer-songwriter while also adding her unique style to cover songs.

She has already had a vast array of experience ranging from choirs, open mic nights, Garage Band U performances, block parties, private parties, to festivals.  Some of her many shining moments include singing with the Glen Ellyn Children's Choir (Anima) performing Carl Orff’s “Carmina Burana” with the Grant Park Orchestra, singing with the Chicago Symphony Orchestra, and singing in The Nutcracker with the Joffrey Ballet at the Chicago Lyric Opera House.

How did it all start? Her parents, recognizing Briley's gift for music, bought her first guitar at 9 years old.  Her Mother then taught herself to play guitar from YouTube just so she could teach her daughter how to play.

Quite often Briley's Mother accompanies her on guitar. However,  Briley has proven to play guitar and sing magnificently on her own.  Not long after mastering singing and guitar, Briley wrote her first song and entered a PTA Reflections contest where her song made it all of the way to State.

When Covid hit there weren't many venues providing Briley the opportunity to perform, so she spent that time learning new songs with her Mom.  They played for over an hour every night until a song was performance ready, after which they'd move on to a new song.

Once things opened back up, 11 year old Briley hit her first open mic night to hone her performance skills.  Since then she has taken every opportunity to perform at family events, private parties, block parties, and festivals.  Then one summer evening, preparation met opportunity.  While in Michigan, she sang at a private party where in attendance was America’s Got Talent 2020 runner up Austin Edwards (from Broken Roots).  Upon seeing her perform, Austin Edwards eagerly joined Briley where they performed a duet of "Shallow" by Lady Gaga.

This kicked up her confidence and interest immensely where she began playing to larger and larger crowds.  She was then accepted to the prestigious singer-songwriter camp at Interlochen Center for the Arts in Michigan and arrived home just in time to play the Rotary Grove Fest.

Keep an eye out for this up and coming talent and remember, her name is Briley with a "B"!

Check out some of our upcoming events

Come out to see Briley play at the annual DG58 Foundation Octoberfest on Friday night at 6:30pm, some great bands are playing this weekend including Freddy Jones Band on Saturday night at 9:30pm

Dog Daze at Fishel Park - Join us for our first annual Dog Daze pet event at Fishel Park!Pack up your pooch and plan for a day of fun-filled activitiesfor you and them! For the pups, we will have an agility coursecompetition, peanut butter licking contest, and more! Forpeople, enjoy food trucks, pet vendors, live acoustic musicand adult beverages. A portion of all beverage sales will bedonated to West Suburban Humane Society.ESTIMATED ATTENDANCE: 200-500 VISITORS 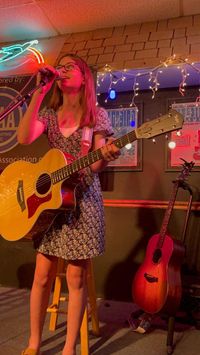 Open Mic at the Bluebird Cafe

Briley was had the great pleasure of playing her song "Prey" at the Monday Open Mic night at the Bluebird Cafe in Nashville TN. https://www.youtube.com/watch?v=QSVkQMye4UI&t=56s

Downer Grove Rotary GroveFest - Annual festival with Carnival and Music Entertainment in down town Downers Grove. Briley is honored to be allowed to perform alongside a lot of other great bands.

Local production of The Little Mermaid Jr. with Briley playing the part of Ariel.

Briley at Wasabi (for the 2nd time)

See Briley at Wasabi for her 2nd time playing there.

On January 8, 2022 the Coterie will be hosting the “Women of Rock” featuring some of Chicagoland’s amazing female musicians. The event will be taking place at Sundance Saloon and all tickets sales will be donated to the Michael J Fox Foundation for Parkinson’s in honor of fellow Chicago rocker, Dave Mikulskis as he continues his courageous battle with Parkinson’s. Tickets are available at the Sundance Box office while they last!

Anima (Glen Ellyn Children's Choir), partnered with the Joffery Ballet to sing during the performance.

Briley with her full band from Garage Band U

This is Briley singing as the lead vocalist in her full band from Garage Band U.

Playing at a Private Octoberfest Party

Block Party at 4900 Block of Middaugh Ave in Downers Grove

Block Party at 4800 Block of Forest Ave in Downers Grove

Block Party at 4800 Block of Forest Ave in Downers Grove. Playing from the Mobile Stage (back of pick up truck)

Check out the article on Briley in the November 2021 issue of Downers Grove Magazine.  See page 39